Dissolved organic matter (DOM) represents the most mobile and reactive pool of soil organic matter (SOM). Climate changes, such as global warming and altered precipitation exert considerable influences on the quality and quantity of soil DOM. However, rare reports have focused on the interactive effects of soil warming and increased precipitation. In the present study, we conducted a 90–day incubation experiment to investigate how the concentration, source and chemical composition of DOM from an Alfisol respond to the variations of temperatures (15, 30 and 45 °C) and moistures (40%, 60%, and 80% of saturated soil water content). Four DOM components were identified through fluorescence excitation emission matrix (EEM)–parallel factor analysis (PARAFAC). Increased temperature alone aggravated the decomposition of plant–derived aromatic components (C2 and C4) but promoted the accumulation of microbial–derived aliphatic carbon (C1) and tryptophan–like component (C3). Increased fungi/bacteria ratio with warming was responsible for the decomposition of plant–derived components. Warming–induced disassociation of Ca–bearing mineral to colloidal Ca facilitated the accrual of microbial–derived aliphatic DOM. Humidification alone and humidification + warming significantly increased the concentration of DOM and the percentage of plant–derived aromatic carbon (C2, C4), which was attributed to the release of Fe–bearing mineral–OC. Accompanying above findings with the results of two–way ANOVA and Variation partition analysis, we found that humidification, rather than warming, may modify considerably the quantity and chemodiversity of DOM in Alfisols under climate changes which in turn impact global C cycling and the ultimate climate. 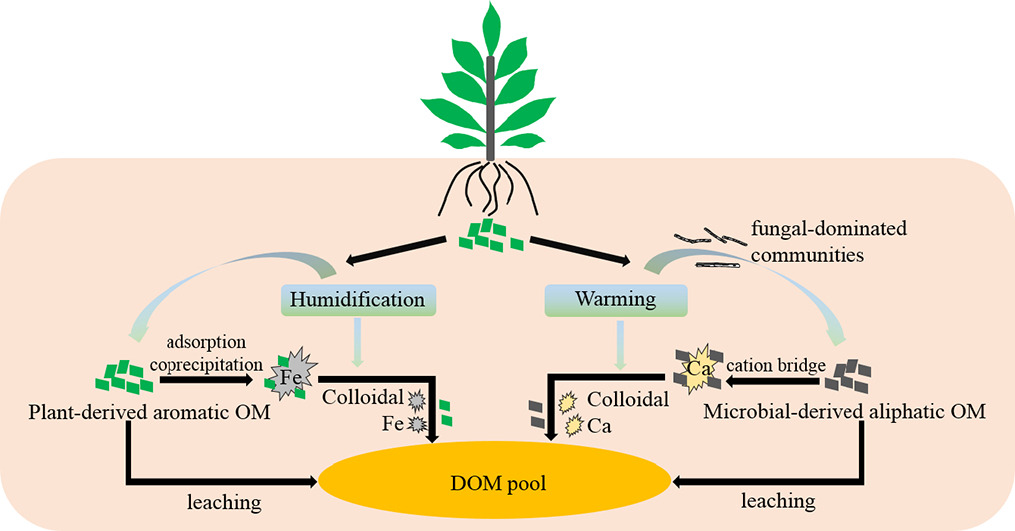